When you run a family business, there are often too many cooks in the kitchen and Lucy Angel is no stranger to this problem, as everyone in the Anderton family has a different opinion about how the band’s first big single should sound. We join the band in the studio as they are listening to different versions of “Crazy Too” with their producer and radio promoter. Frustrated by the lack of consensus between his various family members, G-Man decides it’s time to clear everyone's head a little, so he rounds up the gang for a camping trip to the Smoky Mountains. Wrangling this family to do anything is a challenge but when it's for a camping trip it’s like herding cats! Used to the comforts of home, the Andertons never pack light so they’re taking everything but the kitchen sink with them. There is also the question of G-Man's driving which makes the family crazy at the best of times, but when he's behind the wheel of a large RV, their stress and backseat driving rise to a whole new level. 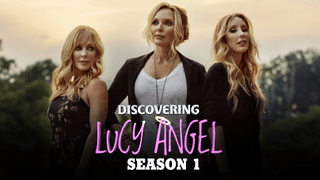 In this first episode, we meet Lucy Angel and family…

The road to success has been littered with obstacles for…

Over the years, there have been plenty of bumps in…

When you run a family business, there are often too…

It’s hard to believe but this week Mom and Dad…

Lucy Angel are playing a gig in their hometown of…

Just when we thought their upcoming single “Crazy Too” was…

No Country For Salsa Lovers

It’s not always easy being the odd man out in…

This week the Andertons are attending a true Tennessee country…

This week is all business for Lucy Angel, as the…

Emily has been “married” to Lucy Angel for quite some…

As Lucy Angel puts the finishing touches on its act…

It’s make or break time for Lucy Angel as the…