Additionally, Hale will Join Dave Holmes for an Exclusive Sit-Down on the Online Edition of AXS TV’s ‘At Home And Social’ Series, Premiering August 28 at 8 A.M. ET on AXS TV’s YouTube Channel and Facebook Page 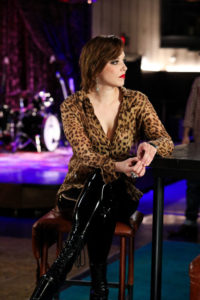 A Year In Music provides a unique and informative exploration of some of music’s most definitive years. Each episode puts the spotlight on a different era of music, viewing the year’s hottest bands, biggest albums, surprising breakups and monumental breakthroughs through the lens of the political and social happenings of the time to provide a fascinating look at how they impacted and influenced each other.

Season three highlights include in-depth profiles detailing how the music world came together in 2001 following the terrorist attacks on September 11TH; the landmark music scene of 1998, which saw the release of the breakthrough album The Miseducation Of Lauryn Hill and the rise of MTV’s hit TRL series, which helped launch the careers of pop superstars such as Britney Spears, *NSYNC and Christina Aguilera; and the pop renaissance of 2008, which saw the emergence of current powerhouse performers such as Lady Gaga, Adele, Katy Perry, Rihanna and Beyoncé, and the election of Barack Obama; as well as the inspiring world anthems of 1986, fueled by hits such as “We Are The World” and “True Colors,” and the Hands Across America movement; and the bitter East Coast vs. West Coast rap rivalries of 1996 which came to a head following the death of hip-hop trailblazer Tupac Shakur.

Prior to making her debut on AXS TV, Hale will sit down with SiriusXM on-air personality and Esquire Editor-At-Large Dave Holmes for an exclusive interview, airing as part of the online edition of the Network’s At Home And Social series on Friday, August 28 at 8 a.m. ET/5 a.m. PT. Filmed from the set of A Year In Music, the candid conversation finds Hale opening up about her partnership with fellow rock songstress Amy Lee, sharing her essential pandemic playlist, dishing on her new herb garden and fishing prowess, and more. Fans can enjoy the interview on AXS TV’s Facebook page and YouTube channel.

“Music is a true passion of mine, and I have always been intrigued by how it so perfectly reflects the social and historical happenings of the time in which it is created,” Hale said. “Hosting A Year In Music is a dream come true for me, as it allows me to both discuss and learn about music’s impact on history and then share that knowledge with music lovers across the world. I am grateful to AXS TV for this incredible opportunity and I cannot wait for it to air!”

“A Year In Music presents insightful and in-depth profiles of the music and moments that shaped the world and we are thrilled to welcome Lzzy Hale as the host in its third season,” said Sarah Weidman, Head of Original Programming, Development and Multiplatform Content, AXS TV. “Her love for music is unparalleled, and her vibrant and down-to-earth personality has earned her a loyal legion of fans—making her the perfect choice to guide viewers along on this unique journey. She is the epitome of rock music, and a fantastic addition to our network!”

When she’s not performing to sold out crowds across the world with Halestorm, Hale hosts her own YouTube series, aptly titled “Raise Your Horns,” where she talks and jams with friends and fellow icons such as Alice Cooper, Corey Taylor, Amy Lee, Taylor Momsen and more. Check it out here.

A Year In Music is produced in-house by AXS TV, with Stephen Stormer serving as executive producer.

Since co-founding Halestorm in 1997 while a student in middle school, Hale has forged an enduring legacy as one of rock’s most dynamic vocalists and skilled guitarists. Guided by her signature sound and powerhouse riffs, Halestorm has enjoyed tremendous success, dominating the charts on the strength of gold singles “Here’s To Us” and “I Get Off,” gold albums Halestorm and The Strange Case Of… and the platinum-selling hit “I Miss The Misery.” Additionally, the band scored consecutive Top 10 debuts on the Billboard Top 200 with Into The Wild Life and Vicious, and made history as the first female-fronted band to place in the top spot on the Active Rock radio charts with the raucous anthem “Love Bites (So Do I)”—which also earned the band a GRAMMY for “Best Hard Rock/Metal Performance.” Hale’s solo achievements include genre-spanning collaborations with some of the biggest names in music such as Dream Theater, Stone Sour, Shinedown, Trans-Siberian Orchestra, Machine Gun Kelly, Lindsey Stirling and more, and her growing list of accolades includes being named Loudwire’s “2018 Rock Artist Of The Year” and Metal Hammer’s 2016 “Dimebag Darrell Shredder Of The Year”. Up next, Hale will be honored in 2020 at the eighth annual She Rocks Awards.